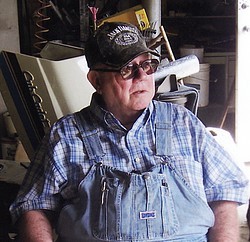 Entering the Navy in July, 1945, as a Seaman Recruit, ADJC Russell served with the occupation forces in Japan until 1946, when he left active service. Returning to active duty in 1948 he again was stationed in Japan and Guam until June, 1950.

Following a period of civilian life from 1950 to 1956, ADJC Russell reported to VR-2 at NAS Alameda, CA, beginning his association with the aviation community. Changing his rating to Airman, ADJC Russell began the long road of advancement to his present rate. He served with Fleet Air Support Squadron Eight, Attack Squadrons One Ninety Two, One Twenty Five, and Twenty Two, and NAS Patuxent River, MD. He reported to Attack Squadron Seventy Five in August, 1970 and has served as Night Maintenance Control Chief, and Carrier Air Wing Maintenance Control Chief.

A Funeral Service will be held on Friday, July 26, 2013 at 5:00 PM in the Mattingley-Gardiner Funeral Home Chapel, Leonardtown, MD with Pastor Doug Hayes. Interment will be private.

Contributions may be made to Hunters Heroes 317 Pinto Lane Lusby, MD 20657.